Bart Neuvel Music has a mission....

Our mission: Everyone can learn to play trumpet

My name is Bart Neuvel, and I am a professional trumpet teacher from the centre of the Netherlands. In recent years, I have trained several hundred students from the age of 7 up until well after retirement age. And my company, Bart Neuvel Music, is specialist in (online) trumpet music education.

I believe that everyone can learn to play trumpet.

My experience in the past decades with hundreds of students is that, with the right approach, everyone can learn to play trumpet. Especially in the beginning of your trumpet-study, things can go wrong if you don't have the right material. And that's exactly where these online courses are about.

How can I help you?

Then I can help you with my unique education system. 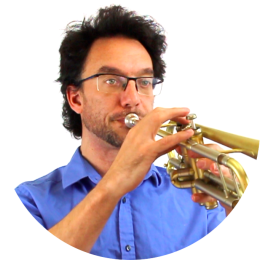 A little about me

I graduated twice. In 1999 At Utrecht University, Faculty of Experimental Physics (Physics). My graduation thesis was about 'the carriage of trumpet sound'. That was an acoustic study in Muziekcentrum Vredenburg in Utrecht in which a large number of (professional and amateur) trumpet players took part.

As a trumpet player I could be heard in the Netherlands, England, Belgium, France, Spain and Germany. This is classical as well as jazz, pop, and salsa music. Currently I perform a lot in a jazz-setting.

Personally I also like a good Barolo wine and you can occasionally see me running half a marathon.

I have been teaching since 2005. This is where I really found my passion. I enjoy introducing people to the world of the trumpet, cornet and flugelhorn. I teach children from 7 years old whom I approach in a playful way. And to adults who (usually...??) have a more serious approach.

The lessons are educational, pleasant and adapted to everyone's pace and ambition. (see also student reviews). I also think that customization is the best thing to do. My lessons are therefore personal. You will not working through a standard method from A to Z, but I know most of the books and methods from the past 100 years. There I look for a book, or occasionally a copy, for your situation. Music theory and making your own music are also discussed.

In this unique online education system, I managed to combine:

Not a secondary subject, but the main thing!

I quickly expanded my teaching to a very stable practice of about 60 weekly students.

This makes me the largest educator in the Central Netherlands.

I don't do teaching as a secondary subject, but it is the main thing for me.

I'm working on it about 50 hours a week!

Get Your free Trumpetlessons guide

As a child I took trumpet lessons for several years...

As a child I had trumpet lessons for a number of years, but stopped much too early. Years later I got the feeling to pick up this old hobby again. I found Bart via the internet, who immediately invited me for a trial lesson. His enthusiasm immediately spread to me. From the first lesson I learned to improvise a little, in addition to technique. What an enormous energy that gives me!

It is now more than 1.5 years later and I notice that I have made considerable progress. The moment I seem to be getting the hang of something, Bart has raised the bar again. This is very inspiring to me!

The trumpet remains a difficult instrument to play and I think I will never stop learning. Bart helps me to continue to develop myself in this.

In a bit of an impulsive mood I signed up for a trial lesson with Bart this summer, and his enthusiasm was immediately contagious.

Everything is covered in the lessons, but most of the time is spent on playing itself and that is of course the most fun.

Bart also knows how to let you go one step further, so that you (even as an absolute beginner) make rapid progress.

Before a lesson I am always curious about what news I will come home with after the lesson. In short: stimulating, enthusing and pleasant, highly recommended!

He adapts the lessons to the person...

I had been thinking of wanting to learn to play the trumpet for years. I found Bart through the website. Quite a difference with other independent teachers to be able to view such an extensive and clear website. The fact that he offers a starting course was also an extra reason to want to take lessons with Bart. To start with an instrument I liked to start with a fixed number of lessons.

For me it is very important that the teacher not only has a lot of knowledge about his subject, but is also a nice person to work with personally. That is certainly the case with Bart for me. He adapts the lessons to the person. If you have more trouble with something, he will find material that can best help you with that. In short, at Bart you have lessons that match your needs.

Evelien, 24, a few months of lessons